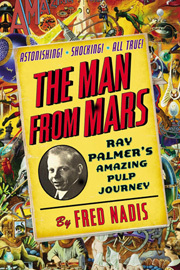 "Fred Nadis’s insightful biography demonstrates that Palmer is significant as well as intriguing. He’s exemplary because he embraced marvels in a scientific age that claims to disavow them."

"The Man From Mars is smart and engrossing, and it expands our understanding of the nuts and carnival barkers who have done so much to cultivate America’s homegrown mythology."
—Jesse Walker, The American Conservative December, 2013

"Palmer could not have asked for a more sympathetic chronicler, or a better one, than Fred Nadis. His prose and his pronouncements are everything Palmer’s practically never were: restrained, nuanced, intelligently considered. Nadis has a great story, and he relates it exquisitely."
—Jerome Clark, Fortean Times, June 2013
"He [Palmer] was surely one of the most distinctive characters to grace (some would say, disgrace) the science fiction field in the past century. Fred Nadis’s book does him justice, and will provide invaluable insights into the science fiction world of the pulp era."
–Richard A. Lupoff, Locus, June 2013
“The sci-fi pulps made a lasting imprint, as Fred Nadis shows in his entertaining "The Man From Mars"…Mr. Nadis does not take sides in what was once a civil war among the fans but reminds them that there was more than one mighty editor back in the Golden Age.”
–Tom Shippey, Wall Street Journal, June 15, 2013
"One of science fiction’s greatest gadflies gets his due in this lively and entertaining biography. . . Nadis quotes liberally from Rap’s editorials and reader letters to paint a vivid portrait of the postwar science fiction scene and fan culture. "
–Publishers Weekly, March 11, 2013
“Nadis…draws from his extensive background in American pop culture to compose a smartly researched and stimulating biography of the mysterious and audacious Ray Palmer…The author paints a story of a larger-than-life writer, editor, and publisher whose unorthodox methods propelled a nascent genre of tales, conspiracies, and other worlds into high visibility. VERDICT Recommended for sf and fantasy fans, popular culture enthusiasts, and general readers.”
–Mark Manivong, Library Journal

"Nadis recreates the wild-and-wooly world of the pulp magazines with gusto and flair, evoking Palmer as part earnest, hard-working editor, part sensationalizing huckster—and ultimately, as a quintessential American. The book is a joy to read."
–Rob Latham, Editor, Science Fiction Studies
"A superb biography of one of the leaders in twentieth-century fringe phenomena. I found it more enthralling than any science fiction I have ever read."
–Richard Smoley, author of Supernatural: Writings on an Unknown History
“An extremely moving account of one of the genuine fathers of contemporary pop culture, told with just the right balance of humor and seriousness. Nadis brilliantly shows that the impulse to ask “What if?” is one of the most thoroughly American habits there is.”
–Ptolemy Tompkins, author of Paradise Fever and The Modern Book of the Dead

MEET RAY PALMER, hustler, trickster, and visionary—a hunchbacked man, just over four and a half feet tall, who nevertheless was an indomitable force, the ruler of his own bizarre sector of the universe. Armed with a sharp intellect and incredible drive, Palmer chose to apply his brilliant mind in unusual directions—oftentimes enchanting us with sagas of worlds and beings that no one before knew existed. He was a charismatic writer, editor, and publisher of science fiction, fantasy, and supernatural pulp journals, and with his typewriter, he changed the universe as we know it. Palmer was a visionary trendsetter who created one sensation after another. He jumpstarted the flying saucer craze; he broke a story, followed by hundreds of thousands of Americans, describing evil denizens of the “inner earth”; he reported on cover-ups involving extraterrestrials, the paranormal, and secret government agencies decades before the X-Files. In a career full of paradoxes, peers praised him for being the editor that made Amazing Stories the all-time best-selling science fiction magazine, and denounced him as “the man who killed science fiction.” He invented a multitude of alluring and weird publications, among them: Other Worlds, Imagination, Fate, Mystic, Search, Flying Saucers, Hidden World, Space Age, and Forum. Love him or hate him—and many did both—Palmer had boundless energy that would not be denied, perhaps not even by death itself: he pictured heaven as a place where he could keep doing what he liked best, which was running a printing press and spinning tales of unusual phenomena, strange creatures, and even stranger lands. This is the story of an offbeat Midwesterner who fulfilled his own singular dream—a character named Ray Palmer who just may prove to be the oddest, most intriguing man you’ve ever met.

Star Settlers: The Billionaires, Geniuses, and Crazed Visionaries Out to Conquer the Universe

Are we ready for space colonization and is space ready for us? I completed this work on the history of space enthusiasm with Alfred P. Sloan Foundation funding. (Pegasus Books, 2020).