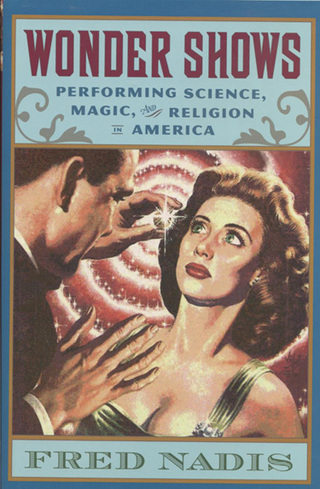 "As its title promises, Wonder Shows is an entertaining book."

–David E. Nye, Technology and Culture
"This is a rich chronicle of sustained popular debate over the achievements of scientific and technological knowledge and 'progress.'"
–Kathryn J. Oberdeck, Journal of American History
"This stimulating new work delves into Americans’ evolving relationship with science and religion through a nuanced study of so-called 'wonder shows'...."
–Matthew Wittman, The Historian

Imagine a stage full of black cats emitting electrical sparks, a man catching bullets with his teeth, or an evangelist jumping on a transformer to shoot bolts of lightning through his fingertips. These and other wild schemes were part of the repertoire of showmen who traveled from town to town, making presentations that blended science with myth and magic.

In Wonder Shows, Fred Nadis offers a colorful history of traveling magicians, hypnotists, inventors, popular science lecturers, and other presenters of "miracle science" who revealed science and technology to the public in an awe-inspiring fashion. The book provides an innovative synthesis of the history of performance with a wider study of culture, science, and religion from the antebellum period to the present.

It features a lively cast of characters, including electrical "wizards" Nikola Tesla and Thomas Alva Edison, vaudeville performers such as Harry Houdini, mind readers, UFO cultists, and practitioners of New Age science. All of these performers invoked cultural authority to back their visions of science and progress. The pseudo-science in their wonder shows helped promote a romantic worldview that called into question the absolute authority of scientific materialism while reaffirming the importance of human spirituality. Nadis argues that the sensation that these entertainers provided became an antidote to the alienation and dehumanization that accompanied the rise of modern America.

Star Settlers: The Billionaires, Geniuses, and Crazed Visionaries Out to Conquer the Universe

Are we ready for space colonization and is space ready for us? I completed this work on the history of space enthusiasm with Alfred P. Sloan Foundation funding. (Pegasus Books, 2020).